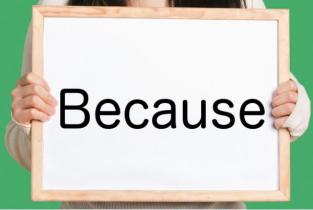 Since the word “of” is a preposition, when we add it behind “Because” it limits what we can have afterwards to a noun.

On the GMAT, “Because” and “Because of” are NOT interchangeable!!!

We use “Because” to describe an entire clause. For example:

CORRECT: Because Ft. Sumter was attacked, the Civil War began.

The bold section (everything between the “Because” and the comma, is an independent clause and could stand on its own as a complete sentence. The word “Because” is describing that entire action. BECAUSE this action occurred, something else occurred.

Let’s look at the sentence if we tried to use “Because of” instead of “Because”:

INCORRECT: Because of  Ft. Sumter was attacked, the Civil War began.

Hopefully you can hear just how “wrong” that sounds! If we’re describing an entire action and using an independent clause, we need only “Because.”

“Because of” should describe a NOUN only.

CORRECT: Because of his complete lack of remorse, the criminal was given a harsher sentence.

“His complete lack of remorse” is a noun phrase, so “Because of” is used correctly.

One thing the GMAT does not like is sentences that attempt to use “Because of” + NOUN + an “-ing” verb. This construction is incorrect, since, as we have seen, “Because of” is best used with just a noun.

We would want these ideas to be expressed with just “Because,” and change the verb to make logical sense:

Let’s look at a practice question that uses this structure:

Because of the broker having a portfolio of losses, he will most likely be let go from the firm.

(A) and (B) both attempt to put the participle (-ing) verb immediately after the noun “the broker.” The GMAT does not approve of this! Therefore, (A) and (B) are incorrect.

(E) is also incorrect (not least of all because its verb tense makes no sense).

Only (C) and (D) are options. They now use “Because” so what follows must be an independent clause. Let’s examine both sentences, and highlight the section between the “Because” and the comma:

Only (D) puts something that could stand on its own as a complete sentence after the “Because.” Therefore, the correct answer is (D).

Vivian Kerr is a test prep tutor, blogger, and content creator with 10+ years experience. She has worked for most major test prep companies, including Kaplan, Veritas Prep, Grockit, and Magoosh.

She offers results-oriented Skype-based tutoring for the GMAT, and select other tests.